Today my bike died. Living in The Netherlands where bikes are everywhere (there are more bicycles here than there are people) and not being able to stand the public transportation (mostly it's unreliable and limited here, I don't like being dependent on a system like that), I really can't live without a bike...

I'll just have to see how this story will continue and I will update this post when I know.

Update: so here's what we're at right now: some plans have formulated. One housemate of mine suggested that her father might have a new (secondhand) bike for me, so she's looking into that. Also, I borrowed the bike of another housemate of mine yesterday night, and because he has broken his leg, he decided that the bike could temporarily become a "house bike". At the very least that will alleviate some of the trouble.
Basically, I just can't stand the immobility of not having a bike.
Posted by Jasper at 4:10 PM No comments:

The pen is on the paper

I wrote today.
I wrote some 1900 words today. Sure, that's not the 3333 words I was doing every day for half of November (or the 4000 words I did the last few days, or the 10000 words I did in the very first day), but still it's a milestone for me. That's because these 1900 words mark the very first time I worked on a NaNoWriMo piece of mine after the month was done.

In 2008, I didn't make the 50,000 and I didn't finish my book. Nevertheless, after November 2008 I have never touched the text again. It's still not done. It's gathering virtual dust.
By the way, this is the one story I wrote that I don't like. In rewriting, it would need drastic changes. The dialogue has become way too repetitive - basically all that's in the present sucks. In the mean time, the real story - which is what they are talking about in the now, but happened in the past - is decent at best.

In 2009, I fared better. I was ahead a day or so when I fell prey to the Mexican flue. Luckily, I didn't get too ill and I was on my feet after only two days, even though I was still not feeling too great and just so happened to be off for a weekend together with my parents. So basically, I had two days in which I didn't write a single word and then two more days in which I only wrote a couple hundred each. Afterwards I calculated my new daily targets and even finished a few days early. On top of that, just about as I reached the 50,000, my story was all done.
I am quite satisfied about what I have written in 2009, but that of course doesn't mean that there is no need for editing. So, it hasn't been as long as it has been for my 2008 novel, but nevertheless, this complete draft has been gathering virtual dust, even though it just needs the editing.

This year, things went a lot better. As I felt too confident about making the 50,000 words-goal set out by NaNoWriMo, I stepped up the pace and set myself a number of other goals. As I mentioned them earlier, I am not going to repeat them (if you're interested, use the tag feature of this blog to take a look at past NaNoWriMo posts), but it ended in me writing the double the amount of words and still finishing with a day to spare. However, this time my story wasn't done yet. On the contrary, after some 95,000 words, my main character finally told the reader his real name.
However, I just broke that curse that said I cannot work on my novels once November is through. I may not be at the editing phase just yet, but right now I am working on finishing my story. It's only the first 1900 words, but it's a virtual boundary that's been broken.
Posted by Jasper at 11:38 PM No comments: 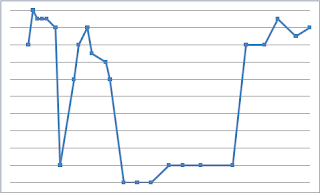 They say a picture is worth a thousand words. Then, how much words is a graph worth?
I don't know, but I bet there's still a couple hundred in there.

I am not claiming you will be able to find out much about these words, but they are in there. My soul is in there.

*disclaimer*: The graph is all about estimations and how well I remember things. I by no means claim it to be precise. The general ideas are all factual though. Oh, and note, the last dot isn't in there yet, simply because I didn't know how to score it.
Posted by Jasper at 5:41 PM No comments:

Even though, a long time ago, I started this blog after realising that a blog was in fact the next generation of diaries, I am not really one to write openly about my feelings. Whenever I do write about my feelings, I always obfuscate so that it won't be all that easy to see what is going on.
Right now, there's a lot going on. However, I don't think I can obfuscate it properly - where properly means it's not just gibberish to anyone who reads it, while at the same time, it shouldn't be to clear to some who might read it. Nevertheless, I wanted to write something, so here goes.

I haven't written much, but I think I have put more feeling into it than I wanted already. Well, what's written is written, but I am not going to write more. We'll just see where this boat is going to strand (for the second - and hopefully final - time that is, the first time we just fixed the boat and got back in the water...)
Posted by Jasper at 6:25 PM No comments:

Last month was amazing. It was tough and left me with little time to boot. I participated in the annual event called NaNoWriMo - or (Inter)National Novel Writing Month. The idea is that you- and over 150,000 other with you- write a book in a month. The goal is set at churning out some 50,000 words of your first draft.

Finally, it's over now. November has passed. Finally, I'll have time again. Finally, I can return to all those projects I abandoned in favor of writing a book.

My story isn't done yet. I'm 100,000 words into the story and it's far from done. It only happened somewhere in the last couple thousand words that my lead character revealed his name to the reader. He has some more traveling to do.
Both previous times I participated in the event I didn't touch my book after November had ended. Will this time be any different?
This time, there's at least one thing that's different. This time, I'm not sick of writing after hitting my target. I'm glad I don't have to write every day anymore, but I'm not through with writing.

On the contrary, I can't stop writing. It all started yesterday (red. this post was written a few days before it was published - on December 1). Yesterday, it was still November, but I had made my target a day before that and as such I was done. However, in class, I took my pen and paper and wrote a real personal (yet fictional) story. Originally, the idea was to put it up here, but it got too long and too personal for that. Maybe I will still publish it some day, but not right now.
Today, I'm in class again and again I was feeling the urge to write. So here I am. Don't get me wrong, though, I'm still paying just enough attention to my class (today, that is, it's not true for yesterday).

Does this perhaps mean that my blog is finally really going to live?