Today, the Orange Pi arrived. Of all the boards, this one will probably be the one that is the most challenging to get to work. Its main problem is that the software support and documentation is simply non-existent. 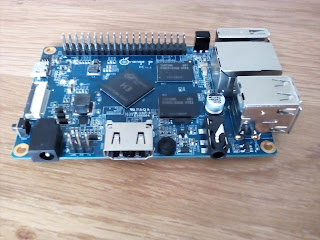 The model that I got is called the Orange Pi PC. I ordered it from China for about 17 euros including shipping, with of course the drawback that it takes a couple of weeks before it arrives. It is clearly modeled closely after the Raspberry Pi. It's specs are very reminiscent of the Raspberry. It trades the DSI connector for a microphone and a power switch, while it has a different type of power supply and has a processor that is significantly faster (at least, on paper). However, the rest of the specs closely match and the two boards are even exactly the same size. 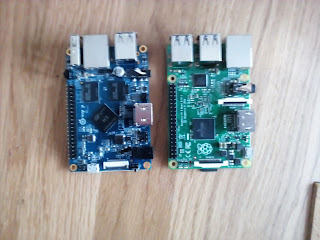 I'm expecting to receive my pledge rewards for the CHIP tomorrow, so then I should have all the boards (and all within the span of a week). The next thing is to get "making". I've already managed to run Debian on both the Pine and the Zero, but I haven't had the time to get much further than that. Let's see what we can do with all these boards.
Posted by Jasper at 9:09 PM

And so, your hardware museum is expanding nicely! These board really are remarkably similar, but even though oranges cost less than half of what raspberries cost, I really don't think the latter have to worry much about the piece of the pi that will be eaten by the former.

PS. Sorry for all the cliche food metaphors (well, they started it!).

Agreed. I wouldn't recommend an Orange Pi to someone who just want to use the board. For me, though, messing around with and seeing how well I can get it to work are the reasons I bought this board.